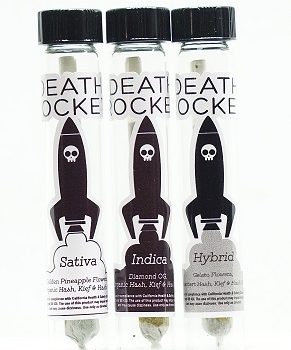 Strap in, say a prayer, and get ready to blast off into the Grim Reaper’s yawning and awaiting mouth! Ok it’s not that scary, but yowza(!) the new Death Rockets on our menu are NOT for the faint of heart.   Combining high-quality flower with organic hash, Kief, AND some powerful hash oil all into one single filtered pre-roll, you’re in for a ride.  This thing is a strong, coughing-fueled trip and is sure to put you down for a while if you light up the whole thing – I smoked an Indica Death Rocket and slept like a baby for ten hours.  The taste isn’t too bad either.  It’s not as overwhelmingly flavorful as the Cavi Cones from back in the day, but the lack of flavoring is more than made up by its insane strength.  Seriously, if you’re just starting off with cannabis in any way, these things will mess you up with just a few puffs.  Like wavy gravy, dizzy-spells messed up.  Proceed with caution, cadets.  If you’ve smoked like a chimney for the last ten years, these things will still mess you up.  As much of a toker that I am, even I was intimidated by these Death Rockets, but I was obviously on to something.  If you want to be blasted off to a dead planet somewhere in the Andromeda Galaxy, grab some Death Rockets and head to the stars