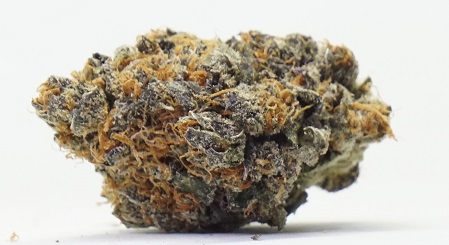 Han Solo, Flash Gordon, Star-Lord, and now there’s Galactic Jack – Sounds like a ray gun shooting space marauder doesn’t it? This pretty, sticky, and aromatic indoor-grown Sativa has a dark but multicolored appearance like dark matter and stardust dancing together in the depths of space, so the name was definitely fitting. My first hit gave me a piney, woody flavoring that was nice and lingering on the tongue but more importantly made me cough and force some tears to surface. Now on to the effects: being a space themed named I could very easily drop some rocket fuel comparisons, being a Sativa, or even saying it engaged my turbo thrusters and I was blasted off into the sky. But honestly, beyond that first hit, my experience was actually much smoother and chill. Very mentally stimulating though, as this review is flowing out of me easily and my brain is bubbling and percolating with creative energy. It kinda feels like going through space at warp speed, as the light of stars are flying by in my mind but physically I’m seated comfortably in the cockpit of my own sleek and powerful starship. Strap in with Galactic Jack for a cerebral supernova while bodily you experience floating aimlessly through space. Get some today and take the trip!