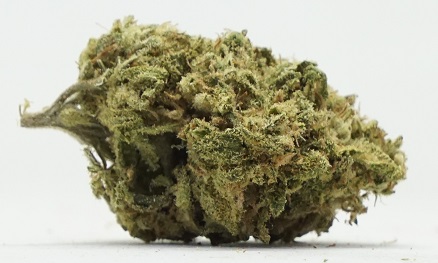 Blue dream can be a very intense strain.  It contains a terpene that intensifies the THC effect for many people. Most consider it to have a very strong cerebral, sativa like effect.  Though some say it can be overwhelming and cause more of a spacey, couch lock type of high.  Strong, heady and with a nice body buzz Blue Dream has been our single most popular strain for the last couple of years.

The California Classic, back again and just as fragrant, bombastic, and fruity as ever; looking like it stepped out of the pages of a High Times centerfold, Blue Dream is the salty ocean air you smell at the beach, the carne asada you sniff at the taco truck, the olfactory caress of pine that tickles your nose in the forest.  Blue Dream is a strong acting and tasty sativa that is unwaveringly popular and after the first few hits of my Blue Dream only preroll, I think this will be the most popular batch yet. Just going a third into my joint I’m high, watery eyed, feeling energized, mentally, creatively, and physically.  If you’re on a budget or are just starting out, a little bit goes a long way.
Because the strength of this bud knocked me for a loop, I needed an extra ten minutes to get used to the mental shift and to grapple with a case of the dizzys.  After that though, I was up and moving, getting things done around the house and finding the energy to do things that had been waiting on my to-do list. The only downside is a serious case of dry mouth, so be sure to hydrate!  As the electric buzz and charge of the high began to wear off I was left with an overall happy and positive outlook, and even sprinkled with some giggles. If you need a mental jumpstart and some spare energy while you admire the navy and cerulean colored skies of So Cal, grab some Blue Dream and feel the Cali influences!